Wine story of Prometheus from the island of Hvar 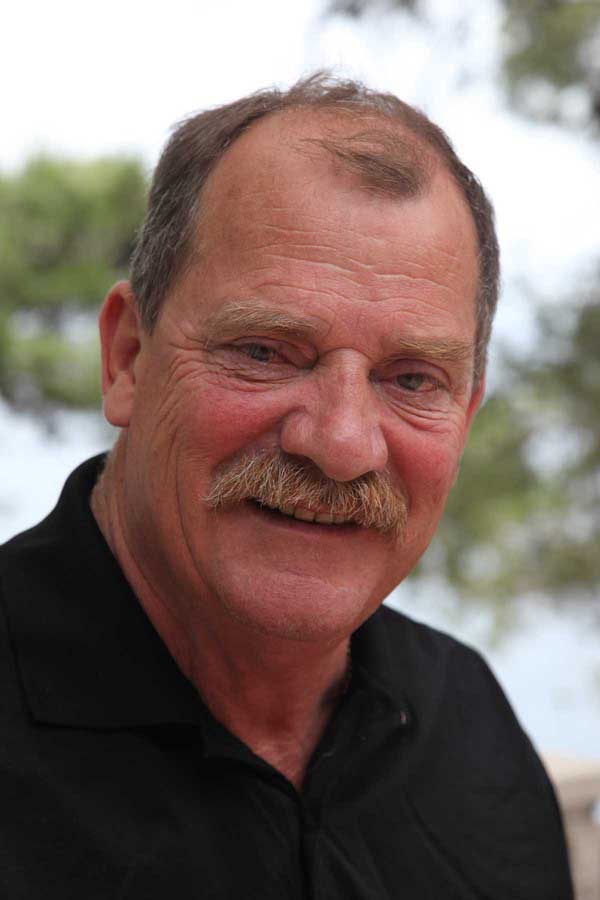 Fifty years ago, Zlatan Plenković was just a poor man who could not afford to leave Sveta Nedjelja to study. Today, Zlatan Plenković is known as the founder of Croatian modern winemaking, but also one of the most trophy-winning Croatian winemaker. The wine story of Prometheus from the island of Hvar is fascinating. A story that made many people ready to declare him the greatest wine lunatic!

“I could declare myself crazy too! Because, everything I’ve done since childhood, I’ve done differently than others. That was my destiny. After I finished elementary school my brother was already in college, my sister was young and my father was sick so I had to stay. I tried to study later, but no one could fund it. I also tried to go to Germany, but from there I returned home to help my mother so that at least the sisters would go to school and we would all stay together somehow.”

„My father was the first to start tourism on the south side of the island of Hvar, back in 1953. Then a Belgian woman arrived in Sveta Nedjelja and became interested in the frescoes in the local church, the following year she brought the whole family with her. At that time, there was no electricity or water in Sveta Nedjelja, and the road to the village had not yet been breached. The first modern heritage that came to this place on the southern slopes of Hvar was the telephone, in 1958. Electricity and water came in 1963. and 1964. And the road did not pass through that claustrophobic tunnel in Zavala until 1969.“

"The village was falling apart, whoever could leave left, although many of them did not leave for the same reason as me - it was not easy to go to school at that time. When I saw my friends working there in Germany, I thought that if I worked like that in my village, I might even survive. And I will be at home! So I decided to go back and stay, I started doing something, I became attached to what I was doing and I couldn’t separate myself from it anymore! I saw how my father started with tourism, recognized that perspective and turned in that direction,” says Zlatan Plenković.
Tourism went well for him, and the small vineyard, which he inherited, served him to produce wine, which he gave as a gift to his guests. He was praised for his wine and Zlatan wanted to raise the level of production one step higher. It was 1972. when he went to Trieste to friends who gave him a corker and a wine filter.

"When I saw their bottles and corks, I was overwhelmed with euphoria. Let's be clear, I didn't have a lot of wine then, I produced so much that by selling to Vinoprodukt (Dalmacijavino), I had just enough to cover the costs of the vineyard. I was doing good in tourism so I wanted to fill my bottles for guests! Immediately upon my return from Trieste, I went to the town of Hvar to an officer I had known before. Well, I already knew everyone on the island, because I sailed to Hvar and maintained a line with a small wooden boat and did everything that was needed for the whole village so they would not waste time - then it was not as easy to travel as today. When the officer heard about my desire to start producing my own wine in my bottles, he almost locked me up! It was right after the Croatian Spring, he told me that if I mentioned the idea of bottling my own wine again, he would call the militia.”

When he remembers that today, Zlatan admits that he was very scared then. He says it was very easy to end up in „Goli Otok“ prison for no reason.

“I quickly cooled off from the idea and built a private hostel that opened in August. Unlike the old house where we could accommodate 10-15 people, in the new one we had up to 60 guests a day. And so, thanks to fear, but also to good tourism, my wine story was completely pushed into the background, ”says Zlatan Plenković.

His tourism earnings and the results he achieved at that time were impressive. A completely logical question was: Why did he replace such a lucrative and easy job of renting apartments with a difficult and uncertain job of winemaking, in the time of war?!

“It’s easy to be smart after the battle! I came back to the idea of producing my own wine in 1985. I was on a tourist commission for the island of Hvar and I had to participate in a meeting of representatives of all Dalmatian municipalities in Zagreb at the Intercontinental hotel. I came there, and the hosts offered us wine in a liter bottle closed with a beer cap, and said: ‘This is from Enjingi, the first Croatian private bottled wine!’ Then I said - if he can do it, so can I. I came home and in September of the same year I bought six wooden barrels. And so it started. I reported everything to the Institute for Adriatic Cultures in Split, but they did not allow me to fill everything as top quality wine, although my position was already top notch. I had to carry out a five-year follow-up - five different harvests. Later I decided to go to Murska Sobota. I bought everything I needed and in 1989. I got a license for high quality wine "Zlatan Plavac". It was the first high quality Croatian wine!”

According to Zlatan, at that time in Croatia only six private individuals filled bottles with their wine - Enjingi and Zdjelarević in Slavonia, Lebar in Međimurje, Tomac in Plešivica and Plančić and Plenković in Dalmatia.

From the initial desire to satisfy his own, and the needs of his guests, and the possible surplus sold to some restaurants, Zlatan created a big problem. The demand for his wines far exceeded 9,100 bottles produced. Buying the grapes from his fellow countrymen, Zlatan Plenković entered a business that was only growing.

“As the vineyards were largely neglected, I bought an excavator, a compressor, hired two, three people and built 24 kilometers of road on these hills. And now every vineyard in the area of Sveta Nedjelja from Ivan Dolac to Hvar has an access road and none of them is 100 meters away from the nearest road! And that brought people back,” says Zlatan Plenković.

Taking the film backwards, Zlatan claims to have learned the most from his fellow winemakers. He claims that himself and Vlado Krauthaker may have done the most in Croatia in experimenting with different varieties. Although he is now determined to base most of his production on Plavac Mali, Crljenak, Babić and Pošip, he does not want to stop playing with 30 different varieties planted in his experimental vineyard. And in a small vineyard in Zavala, which he bought in 1995, he planted all the indigenous Hvar varieties he could find, but also Graševina, Chardonnay… On the north side of the island he continued to play with varieties such as Chardonnay, Sauvignon, Rhine Riesling, Graševina... - wondering what they can give in Hvar conditions. In cooperation with the Institute of Adriatic Cultures and the Faculty of Agriculture, on an area of 3,000 square meters he planted all varieties related to Plavac mali - Crljenak kaštelanski, Dobričić, Plavac veliki, Plavina, Zinfandel, Primitivo,…

“That vineyard is now about 10 years old, the Institute took and analyzed grapes until last year and now they have stopped because they have results. The summary of the whole experiment is that Plavac is perfect for this climate and you don't need to invent hot water. We saw everything, we tried everything, but Plavac mali on Richter 110 is proven to be the best variety, but only for the slopes of Hvar, Pelješac, Brač beaches, where the slopes are 30 to 60 percent of incline, where there are low yields and where the sun burns all day. On the other hand, where the soil is rich, I would not recommend Plavac mali, but he can also give a pleasant wine there if it is made well.” says Zlatan Plenković.

With a lot of pride, he will say for himself that he was "the first in Croatia, while no one even knew what Crljenak was, who planted 10 hectares of that variety" in Makarska.“ He found three old vines, made tribes, and took risks. He knew based on his own experience that Crljenak “is not for the southern slopes of Hvar, because it yields earlier and burns out, but above Makarska, under the hill, there is a slightly different climate where it gives excellent results. And he comes a month earlier than Plavac mali

The construction of the marina is a special story…

“Without paper, everything will look like I haven’t even existed in the last 25 years! But now at least I know that the locals of Sveta Nedjelja don’t have to, like I had to when I was younger, sleep with eyes half open and dread any change of weather. I don't even know how many times, as the owner of the boat, I had to get out of bed at night and run to get it ashore from the stormy sea. "

Many have long been willing to claim that planting a large vineyard on the slopes of Biokovo was the greatest madness he did. Zlatan was the first in Croatia to launch a pilot program to take into service the uncultivated areas of Croatian forests.

"I was the first, nine years ago, Badel and Korlat were second in the melioration of karst soil. Later, based on our experiences, several thousand hectares of vineyards were planted in Dalmatia, which will give back the dignity of Croatian red wines! And the story began out of sheer curiosity. I was walking along the Makarska Riviera and saw one position that I immediately started fantasizing about as ideal for a vineyard. But nowhere near Pisak, Marušić and Mimice was any vineyard. I discovered that there was a vineyard in Bast, two kilometers away, and that was a sufficient signal for me that everything could work out. I started working, and experts from Dalmacijavino took soil samples, made an analysis and concluded that it is impossible to succeed there, because there is not enough food in the soil, and the strong bura wind will take everything away! I can tell you that the first damage I had in that vineyard in Makarska, after eight years, was not caused by bura but by snow! On Easter, snow fell on Biokovo, and in the morning blew bura that carried the snow and glued it to the shoots. In spite of all those who did not believe in this project, I named the first wine I made from those vineyards - The rest of bura. "